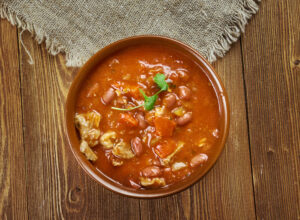 A nice bowl of chili is perfect for cold weather, sick times, or an end-of-the-week snack. This one is a spicy but super hearty and savory chili. It’s packed with veggies and it has all of the classic flavors of chili that you’ve come to love.

Better yet, it’s not a difficult recipe, and it will definitely be added to your favorites.

Use a large pot over medium heat and cook the bacon. When the bacon is sufficiently crisp, remove it with a slotted spoon from the pot. Then add onion, celery and peppers to the pot and cook until soft (About six minutes).

Add the garlic and cook until fragrant (One more minute).

Move the veggies to the side of the pan and bring the beef in. Cook while occasionally stirring until there is no pink left.

Then drain the fat and return to heat.

Mix in the tomatoes and broth, then bring to a simmer. Let this combination cook for ten or 15 minutes until the chili thickens.

Add chili into bowls, then garnish to your taste and enjoy!